America’s Operation Thank You
The Relay in the Sky

Relay in the Sky – Photo Gallery

For 244 years, America has been the World’s beacon of freedom, hope and inspiration, especially during the most challenging of times. Today, America’s resilience is best exemplified by our Healthcare Heroes valiantly fighting in the trenches to combat the COVID-19 pandemic.

The resilience of the American people will once again overcome and shine brightly! All of America is invited to participate in America’s Operation Thank You, a relay of aircraft flying across all 50 states to honor and thank Healthcare Heroes and First Responders, serving as a greatly needed and powerful statement of support.

A special Spirit of Liberty Torch has been created with America’s colors – red, white and blue as a representation of the famous flame from the Statue of Liberty’s torch. As each flight completes it’s leg, Hometown Healthcare Heroes – Doctors, Nurses, Care Givers, First Responders and Community Dignitaries will be at each private airport to participate in America’s Operation Thank You Ceremony – being presented a Love Healthcare Heroes Flag to be flown in their community and the opportunity to hold the Spirit of Liberty Torch.

At the completion of each Ceremony, the Spirit of Liberty Torch and Love Healthcare Heroes Flag will be passed to the next pilot to carry on the next leg of the Relay to honor and support more heroes.

Additionally, Governors and Mayors are being encouraged to designate the day or week when America’s Operation Thank You visits their State and/or City as “Healthcare Heroes Day”. Proclamations of Support from the Governors and their State Flags will also be presented at Relay stops.

Most importantly, the American Hospital Association (AHA) which has over 5,000 member hospitals and hundreds of thousands Doctors, Nurses, Medical Staff and Administrators are supporting and participating in this greatly needed effort.

The America’s Operation Thank You, will begin September 24 with the Closing Ceremony held on October 30 at the U.S. Capitol in Washington D.C where over 100 Healthcare Heroes and First Responders will carry the Spirit of Liberty Torch, Love Healthcare Heroes Flag and America’s Flag – all 50 state flags sewn together to create a dramatic 15’x35’ flag embodying our nation’s unity – from the U.S. Capitol down the National Mall to the White House to be honored once again. 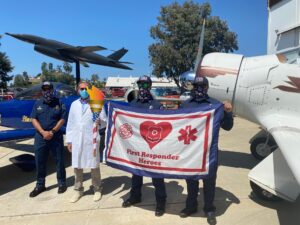 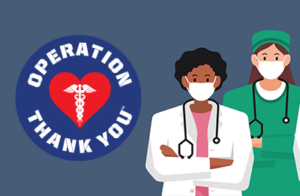 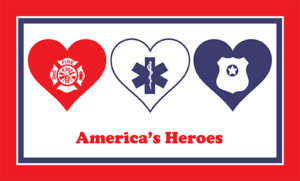