America’s Freedom Bell was cast on June 6th, 2013, the 69th Anniversary of D-Day, with full military honors. It contains 330 lbs of bronze and 11 lbs of steel from the 9/11 Twin Towers. The Bell has the Official emblem of each branch of the Armed Forces embossed and circling it in the order of their founding: Army, Marine Corps, Navy, Air Force, and the Coast Guard. It is inscribed with the words: HONORING OUR ARMED FORCES PAST, PRESENT AND FUTURE, and has 50 stars representing the nation on the lip.

Since its inception, The Bell has been rung by over 5 million people in honor of loved ones who have served in the U.S. Armed Forces. When The Bell is not traveling, it has a prestigious permanent home at the Veterans Museum at Balboa Park in San Diego.

July 21, 2019, commemorated the 89th anniversary of the date of the founding of the Department of Veterans Affairs. On this day, America’s Freedom Bell was rung to honor the 95 Members of the 116th Congress who have the distinction of having served in our Armed Forces.

Each time a Representative’s name was read, The Bell was rung in their honor by who better than Veterans who have served in conflicts from World War II to Desert Storm. These individuals made the journey from the Veterans Home in Chula Vista, California to honor those that once served beside them and are now serving in the Senate and House of Representatives.

The following Veterans from the Veterans Home were truly honored to not only have attended the Ceremony, but to also have rung The Bell for their fellow Veterans in Congress.

Now, these Members of Congress will have their names placed on a separate segment of America’s Patriots Honor Roll, which will be maintained in perpetuity. America’s Patriot’s Honor Roll will literally not only be the first but also the largest virtual Monument to Honor the over 56 million men and women who have served in our Armed Forces since 1776!

July 21, 2019, marks the anniversary in which America’s Freedom Bell will be rung every two years to honor each Member of the current Congress, Senate, and House who have served in our Armed Forces. The Spirit of Liberty Foundation is honored to recognize these individuals for both their service in our Armed Forces as well as in Congress. 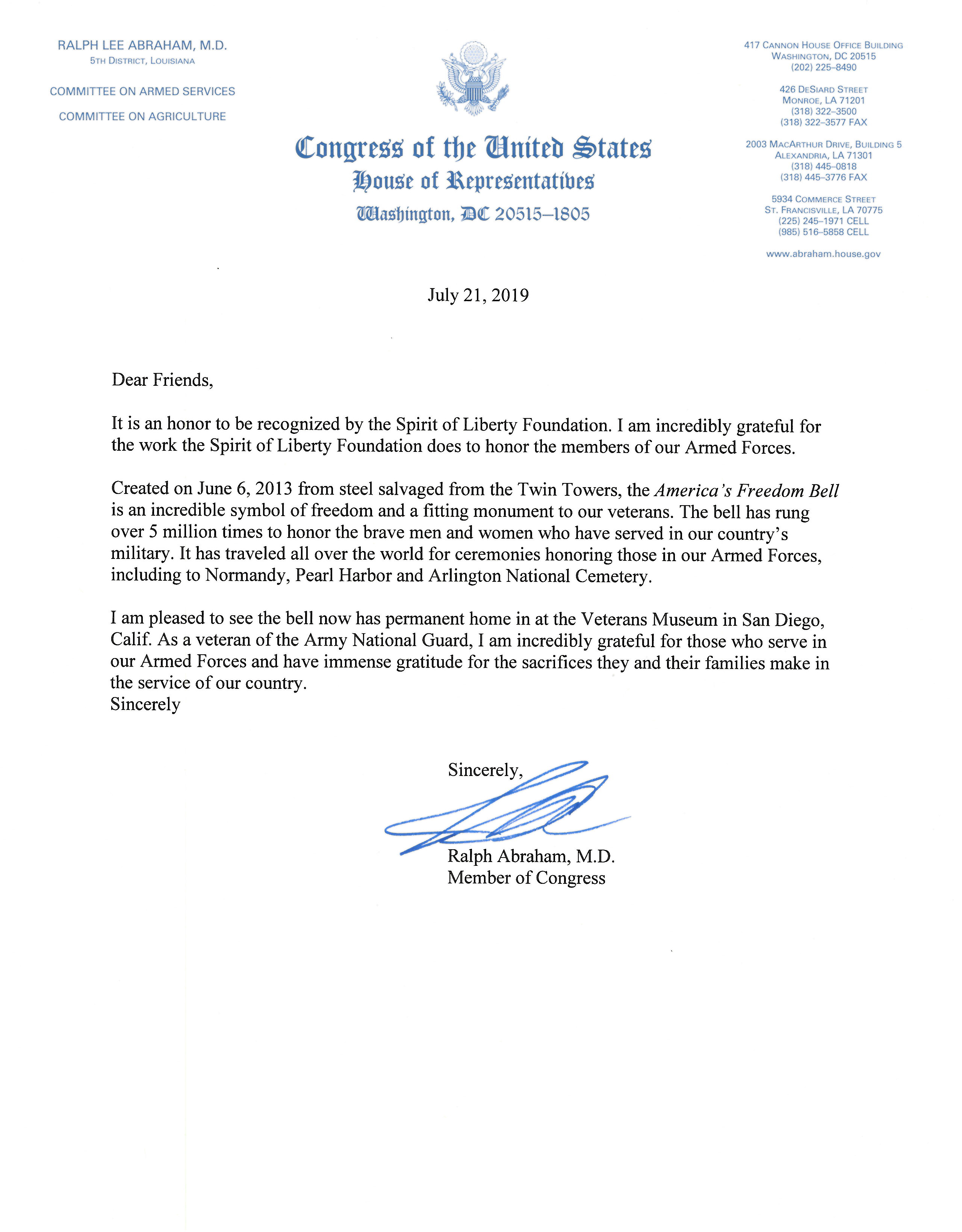